Thanks to Penguin Teen for the book! 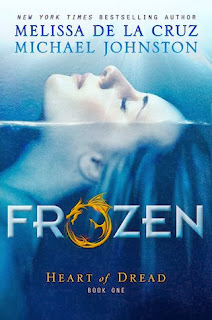 3.5 stars!
Frozen is set in a post-apocalyptic world where life expectancy is low, and the temperature even lower. The oceans, riddled with garbage, have risen, leaving the world coated in snow and ice, making conditions harsh. With a new world, comes a new race of humans born with magical powers-- the Marked-- who are feared by the rest of the population and are forced to hide their identities, lest they be forced to be used as weapons for the corrupt military if they aren't murdered first.
Nat, an ordinary young blackjack dealer from Vegas, or so she seems, is one of the Marked. Worried about her secret being uncovered, she hires a rough-looking crew of mercenaries led by the gorgeous, yet extremely resourceful, Ryan Wesson, AKA Wes, to get her to the Blue, a supposed mythical place where the waters are blue instead of a toxic grey, the sun still shines, and true warmth is more than a distant dream.
Along the way, Nat and Wes find themselves growing closer as they navigate their way through slaving pirates, betrayals, lies, starvation, and the fear that, deep down, everyone is a monster. Can their love survive once they discover the truth of who they are and what it is they really want?

Frozen is definitely an original tale, it's different in a good way, but I think there were some areas that could've been more developed. First off, readers were thrown into Nat's world without any real explanation as to how the world came to be as screwed up as it was, they just had to hope the picked up hints along the way and came to their own conclusions. I'm not sure if that was intentional or not. Overall, it has all the makings of an amazing story: a powerful heroine with a deadly secret, a danger-ridden post-apocalyptic world, a risky romance, magic, and a ton of action! But there just seemed to be something missing... I don't know what... maybe it's just me... Don't get me wrong, I'm still going to read the next one, because, despite a couple of issues, it was a good read.