Thanks to RHCB (Random House Children's Books) for the ARC! 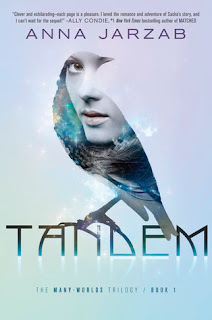 4 stars!
Summary via Goodreads:
Everything repeats.
You. Your best friend. Every person you know.
Many worlds. Many lives--infinite possibilities.
Welcome to the multiverse.

Sixteen-year-old Sasha Lawson has only ever known one small, ordinary life. When she was young, she loved her grandfather's stories of parallel worlds inhabited by girls who looked like her but led totally different lives. Sasha never believed such worlds were real--until now, when she finds herself thrust into one against her will.

To prevent imminent war, Sasha must slip into the life of an alternate version of herself, a princess who has vanished on the eve of her arranged marriage. If Sasha succeeds in fooling everyone, she will be returned home; if she fails, she'll be trapped in another girl's life forever. As time runs out, Sasha finds herself torn between two worlds, two lives, and two young men vying for her love--one who knows her secret, and one who thinks she's someone she's not.

The first book in the Many-Worlds Trilogy, Tandem is a riveting saga of love and betrayal set in parallel universes in which nothing--and no one--is what it seems.

I would like to start by saying that the cover is absolutely amazing! I love it. And, on that note, I honestly have to say that I put off reading this book longer than I should've because I was very worried that the book itself wouldn't live up to the cover. I've always been wary of books centering around parallel universes. It's not that I don't like the idea of it, it's just that it's a very hard type to pull off, books like that can only go two ways: very good or extremely horrible. Thankfully, Tandem did not disappoint! It was an enticing, fast paced ride through and through, full of uncertainty, danger, adventure, romance, and more than a couple tough decisions! Sasha, our seemingly ordinary girl-next-door main character did frustrate me from time to time by putting off very important questions, but she still won me over early in the book and kept me rooting for her until the very last page! I can't wait to read what happens next in the sequel, Tether.
Posted by Cierra at 9:29:00 PM