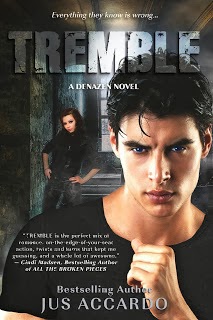 Dez Cross has problems. She’s almost eighteen and on the verge of losing her mind thanks to the drug Denazen used to enhance her abilities. People close to her have turned their back on the underground and are now fighting for the wrong side. And then there’s Kale... Things couldn’t get any worse.

Until of course, they do. Denazen is about to start a new trial—this one called Domination—and it works. But that means out with the old and in with the new. The order has been given to terminate all remnants of the second trial—including Dez. The good news is that there’s a survivor from the original trial. A woman who’s blood may hold the cure for the second generation of Supremacy kid’s defect. But the underground Sixes aren’t the only ones who know about her.

Cross is willing to throw everything he has to keep Dez from getting the cure—including the one thing that might tear her apart from the inside out.

Review:
“I’m different than I was—and maybe I'll never be quite the same—but one thing I’m sure of… The one thing I know without a doubt in my heart is that I’m yours.”

Strap yourself in for a wild ride with deadly twists and turns and danger hiding out where you least expected. Lines will be crossed, choices will be made, and lives will be lost! Find out who makes it out alive in Tremble!
Damn, I love this series! Dez is witty and sarcastic—completely loveable (but don’t tell her that, she might hit you)! It’s almost always been Kale who saves Dez from the hairy situations she manages to get herself in, but this time, it’s the dangerously hot kickass Kale who needs saving. I nearly cried when I found out what those evil wing-nuts at Denazen did to Kale, but I knew Dez would stop at nothing to get him back, even with the deadly side effects of Supremacy beginning to set in. But the question is, will everyone manage to make it through the damage left behind by all these altercations with Denazen? Secrets will are unveiled, sides are taken, and unexpected alliances are made. At this rate, Dez might not even make it to her Supremacy expiration date.