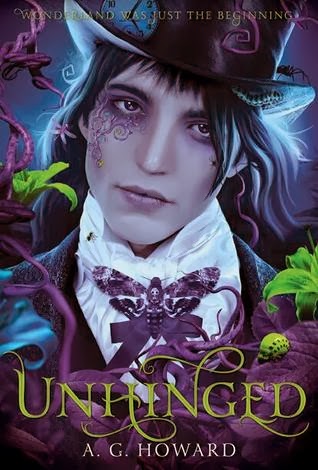 Alyssa Gardner has been down the rabbit hole and faced the bandersnatch. She saved the life of Jeb, the guy she loves, and escaped the machinations of the disturbingly seductive Morpheus and the vindictive Queen Red. Now all she has to do is graduate high school and make it through prom so she can attend the prestigious art school in London she's always dreamed of.

That would be easier without her mother, freshly released from an asylum, acting overly protective and suspicious. And it would be much simpler if the mysterious Morpheus didn’t show up for school one day to tempt her with another dangerous quest in the dark, challenging Wonderland—where she (partly) belongs.

As prom and graduation creep closer, Alyssa juggles Morpheus’s unsettling presence in her real world with trying to tell Jeb the truth about a past he’s forgotten. Glimpses of Wonderland start to bleed through her art and into her world in very disturbing ways, and Morpheus warns that Queen Red won’t be far behind.

If Alyssa stays in the human realm, she could endanger Jeb, her parents, and everyone she loves. But if she steps through the rabbit hole again, she'll face a deadly battle that could cost more than just her head

“You are Wonderland. That is your whole; accept it, and you can rule our world.”

Just like the first book, it took me a little while to get over the initial horror that encompasses the scary-sexy hybrid that is Wonderland, a version that is completely creeptastic! I mean, seriously, enough to make Tim Burton drool! But once I did, I strapped myself in for another wild ride.

In the follow up to Splintered, it’s been a year since Alyssa and her aspiring artist/ skater-boy boyfriend barely escaped the Red Queen’s wrath in Wonderland, even though Jeb has no memory. But there’s no running from debts or destiny. Soon Morpheus shows up to convince Alyssa to return to Wonderland (and him) to reclaim her throne and stop Red from tearing his home apart. Alyssa refuses, wanting nothing more than an ordinary life with Jeb. Unfortunately, her enemies have other ideas. Since Alyssa won’t return to Wonderland, the badies decide to take the fight to her on her own turf. Lines will be crossed, secrets will be uncovered, and no one will ever be the same. Alyssa is up for one hell of a fight because, in the human world, she has everything to lose.

I have to say that, though I love Morpheus, I will always be on team Jeb, and it felt like there wasn't enough of him in this book! Not to mention the ending… OH MY GOD, THE ENDING! I can’t even talk about that right now. Still, it was a pretty good sequel. I can’t wait to find out how it all ends in Ensnared!