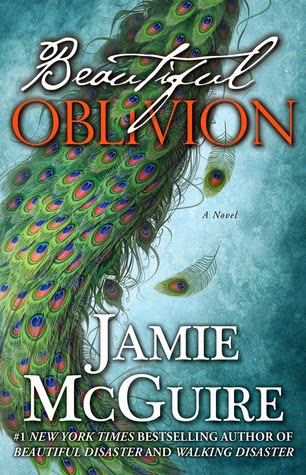 “I've had a lifetime of wrong. You're the only thing that’s right.”

Hot-damn! Are all the Maddox brothers this mind-numbingly perfect? Sign me up! When I first read Beautiful Disaster and Walking Disaster I thought there was no way in hell anybody could top Travis Maddox, then I read Beautiful Oblivion and Trent leaves me on the verge of indecision (But Travis still wins out as my personal favorite). Cami is spunky and Trent is absolutely adorable; together they’re perfect!

Trenton Maddox has been in love with Cami Camlin since kindergarten but that’s always been his well-protected secret because it scares the ever-loving crap out of him. One day, he decides to finally make his move and strikes up a conversation with Cami at the Red Door and they hit it off. Unfortunately, not only does Cami have a mysterious boyfriend in California, but she seems to be harboring a secret of her own. As the two grow closer, Cami is faced with some rough decisions to make as her troubled past rears its ugly head and secrets start slithering to the surface.
Cami’s elusive secret regarding her boyfriend kept me on edge thought the entire book. I thought it was something more serious than what it was—maybe he was a criminal or he had something to do with Mackenzie’s death. When I did find out what it really was, on, literally, the last freaking page, I felt like an idiot. I mean, seriously, it was right in front of my face the entire time!

I loved Trent and Cami’s story very much and I would like to see the next Maddox Brother’s installment continue their story before moving on to the next brother! Unfortunately, I have heard absolutely nothing about the next book in the series!