When Life Gets in the Way by Ines Vieira 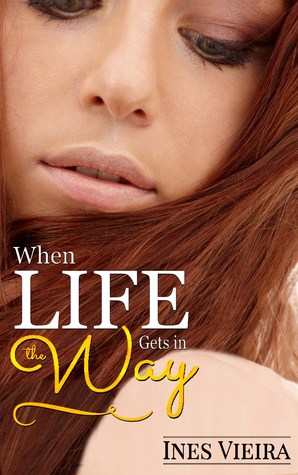 A huge 'Thank you' goes out to Ines Vieira for the e-book!

"You don't plan life, it just happens. And you sure as hell can't control the things that happen to you. They just do."

The story of Cass and Isaac is certainly a cute one. Both characters are charming in their own way and occasionally frustrating in others, yet you still root for them to get it together in the end. Told in alternating POVs, When Life Gets in the Way is a perfect read for a vacation or just when you're in need of a distraction, but still want to be able to set it aside from time to time in order to get other things done.

Cass has a lot on her plate. Between quietly trying to take care of her younger brother and ill mother while her father is off on jobs around the world for several months at a time and working her ass off to impress admissions at Berkeley, she doesn't have much time for boys. This is something she doesn't really see as a problem, that is until her best friend's cousin Isaac Silva moves back to Plymouth and immediately catches her attention. Isaac has problems of his own, however, and most of them stem from his abusive father and his belief that love is an illusion. Yet, one glimpse at Cass and he considers throwing his pessimistic views out the window for just the chance to get close to her. Neither Cass or Isaac has the time or desire to fall in love in high school, but it looks like life might have other plans.

I have struggled a lot with what to say about this book. While I liked the storyline and there were a few lines that knocked it out of the park, I found that some parts were unnecessarily repetitive and others lacked clarification or detail, which I think kept me from fully connecting with the story at certain points. Still, those are just nit-picky things and it was enjoyable overall. Cass and Isaac are forced to deal with issues that even adults would struggle with as teenagers, and are faced with many choices. Seek help or keep silent? Stay or run? Remain friends and follow the path they've already laid out for themselves or risk it all for a chance at having something most people only dream about? Everyone has plans as to what their future should be like, but what are we supposed to do When Life Gets in the Way?
Posted by Cierra at 8:18:00 PM