Sea of Strangers (The Ryogan Chronicles #2) by Erica Cameron 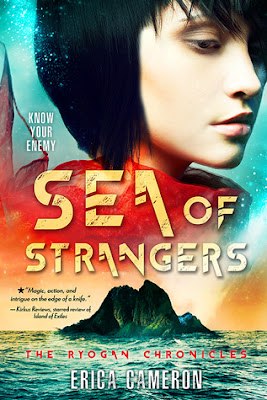 Thank you to Chapter by Chapter, Erica Cameron, and Entangled Teen for the ARC through NetGalley and the opportunity to participate in the blog tour!

"We're fighting to get home... to keep the salvageable pieces."

I've been so excited to read this book it wasn't even funny. I loved Island of Exiles and couldn't wait to see where Khya's adventure took her next. This has honestly been one of the most original and intricate series I've ever read. I adore the interesting dynamic Khya and Tessen have and welcome the refreshing break it gives readers from the old cliches.

Khya and her people have been lied to their entire lives. Yorri is not dead. The Miriseh are not gods. Ryogo is not the heaven they get to go to if they serve them well and the Miriseh do not guard its gates. Each one of these lies has been shattered to leave one truth crystal clear: they must kill Varen. However, the one thing he didn't lie about was being immortal, so Khya and allies have traveled to the real Ryogo in search of the secrets Varen had hidden there before he was exiled five-hundred years ago. Many of the Ryogans still fear magic even if they don't believe the legend of the bobasu, so Khya and her friends are being hunted even in the land they're trying to help save. In order to save Shiara, Ryogo, and her brother, Khya will have to make sacrifices and learn to be the leader she always wanted to be.

Because it's apparent that this series is going to go on for a bit, it makes sense that a lot of this book would be a set up for the ones to follow, and it was, but a lot of really important things happened too and there are a couple of interesting plot twists. I like that Erica Cameron doesn't skip steps to get to where she's going, she takes her time to build her plot which makes the world she's shaping so much more rich and developed. The only problem I had was I feel like Khya and Tessen's relationship was a little more....muted than it was in the first book. I mean, it was there and they interacted often, but it just seemed to me that something was missing. Still, they're one of my favorite pairings. I'm usually a total sucker for a hot alpha male, but this relationship was just so different and interesting. It was the epitome of an equal relationship that is so rarely seen in writing. I love that, while Khya often takes control of the romantic interactions in their budding relationship, Tessen is in no way seen as meek or submissive; he is confident and capable of holding his own. And, while Tessen was originally the one constantly pursuing the prospect of a relationship, he respects her wishes and boundaries. So, I'd love to see more of that brought back in the next book. If they survive that long. Will they make it home to save Shiara or will they remain forever adrift, hunted in Ryogo amidst a Sea of Strangers?
Posted by Cierra at 9:21:00 AM