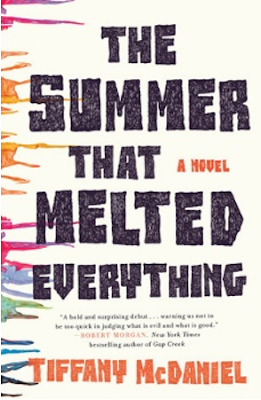 Q: When was the first time you realized you wanted to be an author?
A: Ever since I was a kid, I've been writing. It was just something I was drawn to do. Set the lamp of story out of the dark, and I will be drawn to it like a story-obsessed moth. I wouldn't realize writing was a profession I could have until I was in middle school and the guidance counselor came to my class to talk to us about what we wanted to be when we got older. Writing was just so wonderful to me, I didn't think you could get paid to do it. My parents had jobs, very hard jobs that made them tired and not a lot of money, so I thought that that's what I would have to do. Have a job I didn't like. Though it took me eleven long years to get a publishing contract, realizing I could have writing as a career was like being told magic is within reach and it's all beautiful sparks and dazzling infinity.

Q: What's your favorite flavor of ice cream?
A: So difficult because I love ice cream, but I'd say Neapolitan. It's chocolate, vanilla, and strawberry so really there's nothing more to want.

Q: How long did it take you to write the first draft of The Summer that Melted Everything?
A: I wrote The Summer that Melted Everything in a month. That's usually how long it takes me to write a novel. For me, I like to get that beginning, middle, and end of a story down as quick as I can because I don't like the story to sit for too long. When it sits for too long, it can lose its essence and then I begin to feel like I'm working with wilting flowers.

Q: What's your favorite book and why?
A: I have quite a few favorite books. Perhaps the leader of the pack is Dandelion Wine by Ray Bradbury. It's Bradbury, so the verse is beautiful. I want to be buried with this book so my ghost can have it in hand.

Q: Are any of the characters in your novel based on people you know, whether it's in personality, and/or mannerisms?
A: My characters are very real to me and are not based on anyone. They are truly their own hearts, minds, and souls.

Q: What's your favorite line from your novel?
A: Perhaps it's the first line:
"The heat came with the devil."
It was the first line I wrote in the novel, so really it's the line that started everything.

Q: What's something you've read that has changed your outlook on the world/life in general?
A: There are quite a few things. One of the earliest books I remember reading that caused me to look at life differently was when I was a kid and I read Barbara Cooney's story, Miss Rumphius. Even from the title we're being introduced to this independent woman. That was really the first book I read that had a female character taking control of her own life. She worked and traveled and lived the life chose, all without a husband or male figure in her life. It was such an empowering message for a kid's book and something I was really drawn to as a little girl. There's also the message Cooney was getting across that the seeds we sow in this life can be beautiful things, but for me as a little girl, I identified with the strength of this woman. I wanted, and still want to be, like Miss Rumphius. In charge of my own life, living happily in a house by the sea, tossing seeds to the wind.

Q: What do you think is the biggest problem we face in the world today?
A: We have a few problems on hand. I think the biggest is that we just need to learn how to treat each other a little better and with a little more love.

Q: What was the first thing you remember wanting to "be" as a kid?
A: I knew I loved to write. I wouldn't realize it was a career until much later. But I have always wanted to be a witch too. I was a kid always interested in ghost stories and monsters. I wanted my own spell book. I still do. I'm still waiting on that flying boom...

Q: What inspired you to write The Summer that Melted Everything?
A: The inspiration question is always a little difficult to answer. Creativity is hard to bring down to a science. I do get inspired by the characters themselves. They hover around me as I write. They encourage, demand even, that I write them the best beginning, middle, and end of a story that I possibly can. I owe that to the characters. I owe that to the readers.

Q: What do you have to say to someone about to read your novel?
A: First, I'd say thank you for reading my novel. There are so many great books in this world to read, how can I not be incredibly thankful when someone chooses to read my book. And secondly, I'd say I hope you enjoy it. I hope that by the time you turn that last page, you are happy at having spent some time with the novel.

Q: If you could live anywhere in the world, where would you go?
A: That's difficult because there are so many places I have yet to go. I have to experience the sea-side for a bit to know if I like it there. I need to walk the sands of the desert to know if I like it there better. I have to see all the rolling hills there and to see all the lakes there are to swim in before I really know where I want my roots to take hold.

Q: What's next for you as far as writing goes?
A: I have eight completed novels and I am working on my ninth. The novel I'm hoping to follow The Summer that Melted Everything up with is titled, When Lions Stood as Men. It's the story of a Jewish brother and sister who escape Nazi Germany, cross the Atlantic Ocean, and end up in my land of Ohio. Struggling with the guilt of surviving the Holocaust, they create their own camp of judgement. Being both the guards and the inmates, they punish themselves for not only surviving, but for the sins they know they cannot help but commit.

Q: If you could spend an afternoon with anybody (real or fictional / alive or dead), who would it be and why?
A: There are quite a few people but because I'm in a literary state-of-mind, I'll say I'd spend an afternoon in a dandelion field with Ray Bradbury. He can teach me how to make Dandelion Wine and perhaps we'll go to mars together too.

Q: Have you ever judged a book by its cover?
A: I've looked at a book cover and thought it was ugly, but I've never not bought a book or read a book because of it's cover. That's not fair to the story inside the cover. Authors usually don't get any say in their book covers. That's the publisher's decision. I think my US cover makes some readers think The Summer that Melted Everything is a young adult book and I don't think the cover represents the story, but again I didn't have a say in the cover, so I hope other readers don't judge a book by it's cover as well.

Q: What's your favorite thing to write about and why?
A: I love writing about life itself. Those moments in our lives when something happens that changes not just ourselves, but those around us. Much like the tale in The Summer that Melted Everything, there's no better subject than life.

Q: Who's your favorite character from The Summer that Melted Everything?
A: That's hard to say because I love them all. One of my favorite characters to write was Sal. He's the one who came to answer the invitation inviting the devil to town. Sal is a contradiction, an old soul in a young body. That sort of wisdom and poetry is always interesting to write. He's also presenting himself as the fallen angel, and it's not often one gets to write dialogue for the devil himself.

Q: What's your biggest career goal?
A: To be someone's favorite author.

Q: Id there anything else you want your readers, or potential readers, to know?
A: I would like readers to know that without you, there are no novelists to be had. Readers give meaning to an author's words. So if you like the book, tell everyone you know. Be that book's champion because if you do, you're being a champion for the author herself. My only hope is that readers like what I've written. That they can count on me to deliver a story that's worth both their time and their hard-earned money. Nothing would make me happier than to know a reader has finished one of my books with the pleasure of having read it. That's what I strive for as an author, to be someones favorite author as so many authors have been mine. As far as where readers can find me, I'm not on social media, but they can jump on to my website here at www.tiffanymcdaniel.com. Readers can also connect with me directly through my website. That connection to readers is very important to me. As I've said, they're the ones who determine an author's entire career. How can I not give them some of my time, when they've given some of their time reading my book?

I would like to give a big thank you to Tiffany McDaniel for taking the time to participate in this Q&A as well as to my friend Tam for helping me come up with some of the questions!

Be sure to check out my review for The Summer that Melted Everything here!